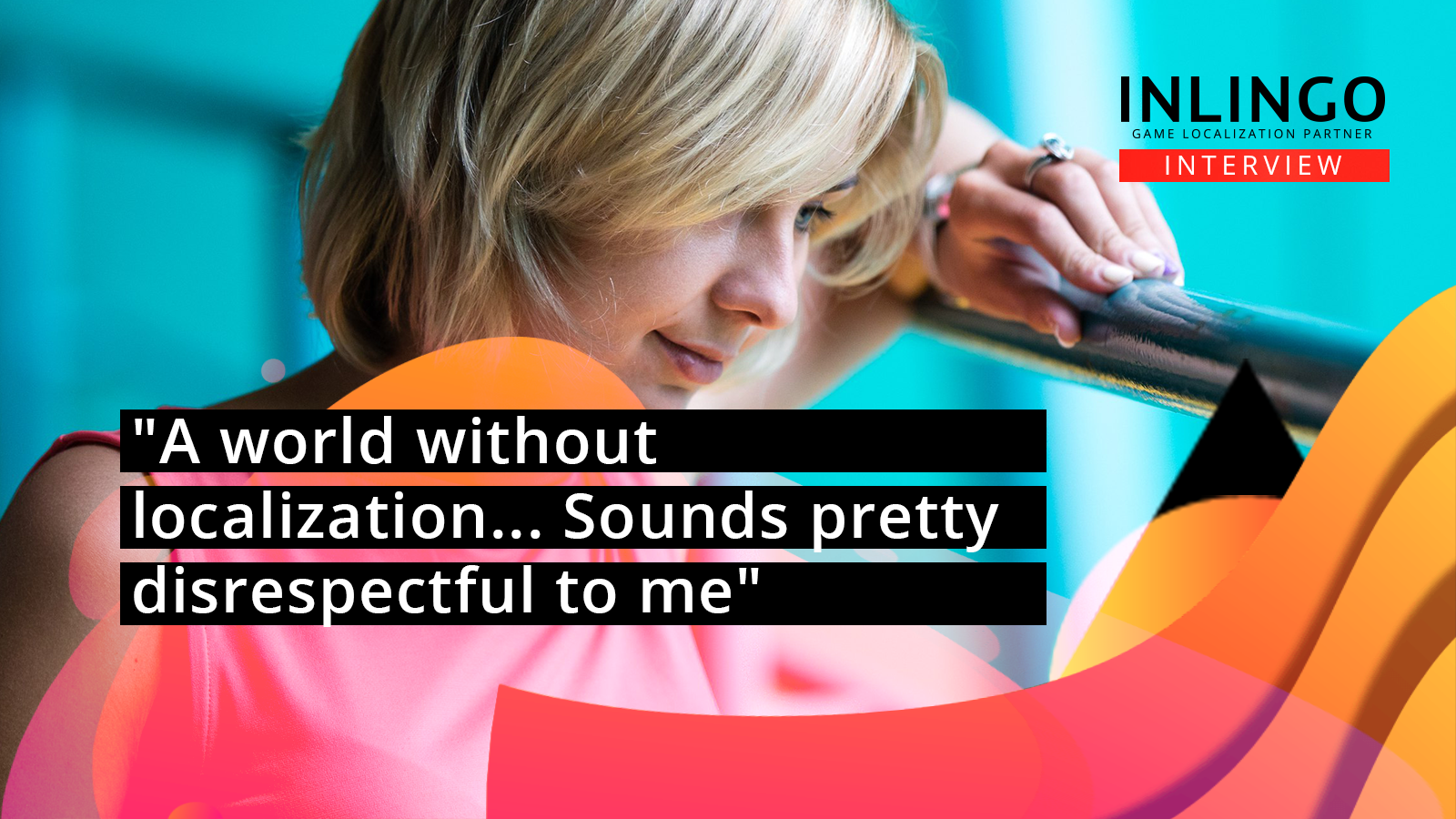 We have more knowledge from our partners to share with you.  In today’s interview, our Artem spoke with Yulia Arzhakova. She is the localization manager for IT Territory, one of the MY.GAMES (Mail.ru Group’s gaming division) internal studios.

Yulia talked about the qualities that Mail.ru looks for, the importance of localization, and about how to start a successful localization department in a development company.

INLINGO: Let’s start with a hard one: do you like to play games? What’s your favorite game at the moment? Do you play more on consoles, mobile, or PC?

Yulia: Yes, I love games. That’s one of the reasons I got into game localization. I was searching for a way to get more involved with that area. Right now I play mobile games most often. I’m a big fan of IT Territory’s games. I also liked Gardenscapes. A great game with an interesting concept.

Tell us about what it takes to get hired by MY.GAMES, or, in other words, how did you find your way to them?

Thanks to globalization and shifting standards. Just five years ago, localization managers generally worked for translation agencies, and large companies interacted with them as employees of their partners. Some companies had their own specialists who were in charge of interacting with third-party translation agencies, which means they would send things out to be translated, then just accept the files and perform quality checks themselves. Localization had the same external feel.

A lot has changed now. People understand that a translation has to be done along with the game, since that is where the text lives, meaning you will need internal localization specialists who can embed localization processes in the business.

How did you start localizing games, and why? What was attractive about this industry in particular?

Almost ten years ago, I started out localizing documents, then started working with multilingual localization, and only then got into localizing games. Gaming industry dynamics leave their mark on localization as well: genres change, games change, the characters, the dialogues, everything changes. The work can get really interesting and quite diverse. In addition, you have the opportunity to learn a lot very quickly here thanks to how fast this industry develops. You have to be able to think clearly and on your feet =)

Is the concept of localization an obvious one for you? Why is localization necessary? It may very well be that English alone is enough: it’s international, and you can save money.

But imagine the world without localization. We’re not going to think about English, because even though it’s international, the number of people who know it well is still quite small. So, a world without localization. That means movies in their original language, advertisements and games in foreign languages, medicine instructions in the producer’s native languages, et cetera. If you don’t speak the language, that’s your problem to solve. Let’s just have everyone learn the other languages, there’s only six thousand or so in the world after all.

Sounds pretty disrespectful to me. Localization’s main goals are creating a comfortable life for people, contributing to leisure and new emotions, development, and equality.

Yulia, you joined IT Territory about a year ago. Please tell us about your experience, about how you launched the localization department: what were the prerequisites, what challenges arose, what had to be changed?

We essentially just ‘opened’ a mini translation agency within IT Territory. It definitely wasn’t easy—there were a lot of difficulties at the start, and there still are now. But our main goal was to raise localization to a new level in terms of quality and speed of work, and have it all done within the company.

In fact, all our further actions were taken with this goal in mind: we found and tested translators, started creating glossaries and reference materials with the help of project teams, figured out how to do QA on our terms, created translation databases for every project, and so on. But there is still a lot to do. Some processes require debugging, some things still need to be changed or corrected, but the localization department is already doing what it is intended to do very well.

What does the process of game localization look like?

The whole process is completely standardized: content is uploaded in editable formats, the localization (translation + edition) is done in working languages in CAT software (programs for completing translation projects) with reference to glossaries and reference materials, the translator’s questions are answered, the received files are automatically checked, the prepared translation is uploaded to our admin hub, QA is done, changes are made, and TMs (translation bases) are updated.

What software do you use in your work?

You have four projects in the works right now. Can you tell us what project is the most difficult in terms of localization, and why?

Each game has its own quirks. Each one has its own team of translators, with rare exceptions. Evolution 2 has a lot of literary dialogues and an interface that is particularly difficult to localize, while Juggernaut Wars has more characters with unique abilities and personalities than the other games. HAWK and Space Justice are set apart by their clear, concise phrasing, long list of terms that are encountered frequently in the game, and strict character limits for lines of text.

You recently launched Evolution 2: Battle for Utopia globally. It’s like a mash-up of the console series Borderlands and Team Fortress on mobile. Can you tell us about working on the localization of this game? There’s quite a bit of dialogue between missions, am I correct? Were there any difficulties with the translation?

It was a very intense process. We rewrote the English translation alone at least a couple times. We wanted to make the text as lively as possible, to make sure all the lines matched the character who said them in terms of personality, phrase length, education level, and so on. For the other languages, there was a lot of discussion on how best to translate as well.

It was when working on the localization for Evolution 2 that proximity to the development team really played an important role. We released a test build in English first, and then in the other languages as soon as the translation was finished. This let us look at a large portion of the translation and significantly clean it up before multilingual testing. It turns out that there were lines that looked just lovely in MS Excel, but didn’t look so good in the actual game. There were extra punctuation marks barely visible in the translation file that were glaringly obvious in the game, things had to be cut or changed. The process continued non-stop until the very moment the game was released.

Finally, tell us a little about your most important work principles that enable you to construct business processes and effectively manage them within localization.

I would say that it’s not so much the work principles that are important, but the qualities that you need to be successful in localization: discipline and patience.

We answer all the translators’ and teams’ questions, make corrections, compile and update glossaries and other reference materials, discuss and come to an agreement on various issues, reduce long strings to fit character limits, rewrite lines that have already been translated to meet the requirements of the teams, come up with different testing methods… and we do this all calmly, every day. That’s patience.