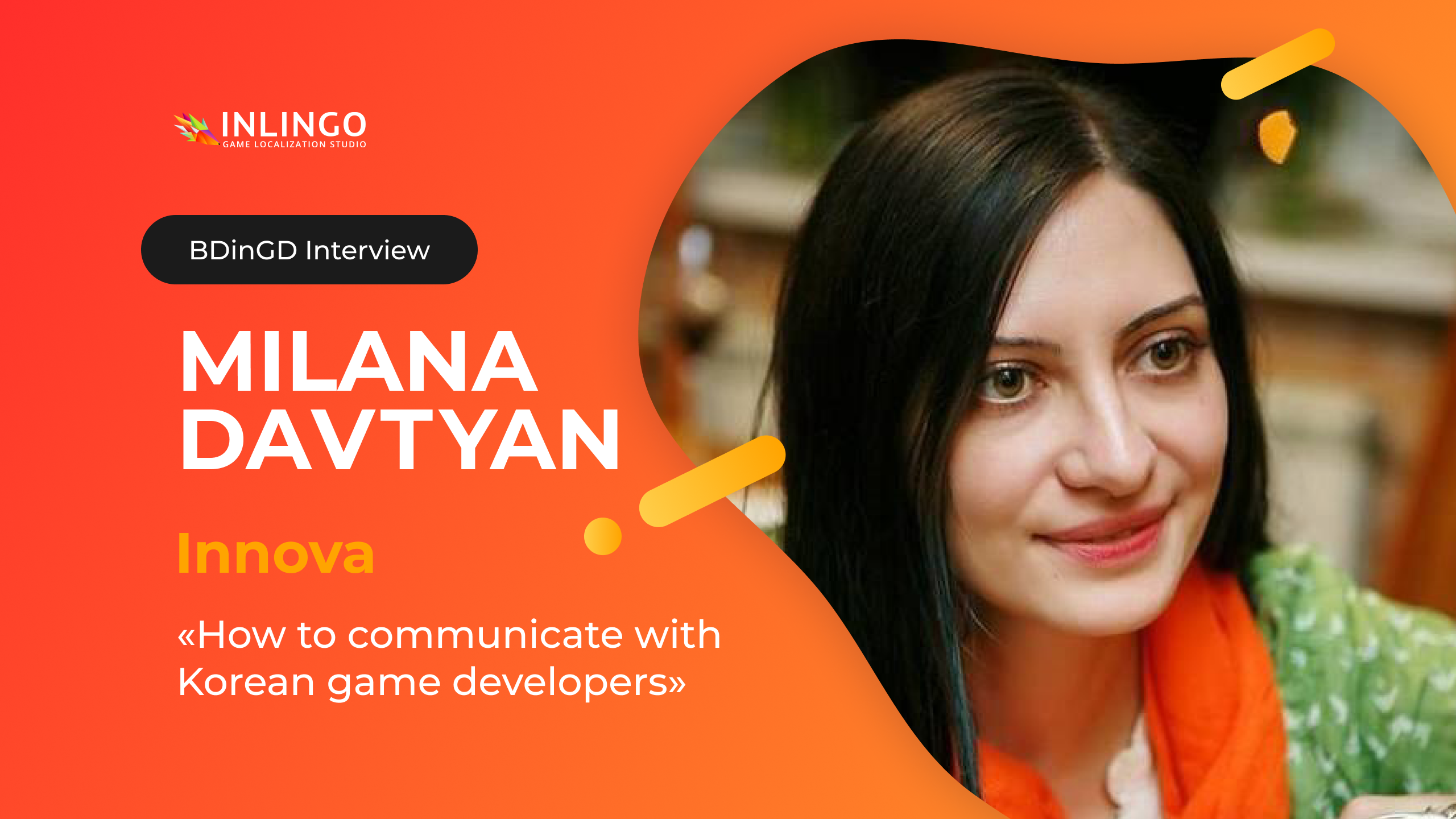 This interview was written for the BDinGD website—a networking project of Inlingo company. On BDinGD we speak about business processes, team development, and communications in the game industry.

Communicating with people from other countries is like crossing a minefield: you never know when you’ll stumble across a difference in mindset, upbringing, or outlook on life. When it comes to business partnerships, it’s especially important to keep these differences in mind to achieve the results you want. BDinGD spoke with Milana Davtyan, head of the localization department at Innova, to find out all there is to know about working with Korean developers: when to afford yourself a smiley, why you shouldn’t be taken aback if they seem to talk down to you, and why respect is all-important and should be present every step of the way.

What’s the hardest part about interacting with Korean partners?

You’ve probably heard about the notorious difference in mindset between the East and the West. It sounds like a stereotype, but there really is a difference. Our Korean partners, for example, are much less inclined to automate processes. They are very reluctant to swap the customary tools for new ones, and I wouldn’t say they are completely open to suggestions. This, of course, depends on the size of the company and the specific team, but everyone has something in common.

When you first start communicating with them, get ready for your empathy to glitch. You won’t be able to correctly identify your partners’ emotions right away. You’re going to have a hard time guessing how they feel about your suggestions.

And you also shouldn’t forget that hierarchy is very important in Korean society. If your position is lower than that of a Korean colleague, they will speak down to you. There’s no reason to get offended by it. You should just take it as a given. On the other hand, Korean colleagues with a lower position than yours will speak to you with exceptional politeness.

What advice would you give to Western companies who want to work with Korean studios?

I don’t think my advice will be much of a revelation to you. Be attentive and open to new things. Try to accept people who come from a different culture and have a different mindset just as they are. Try to understand them.

It is always worthwhile to study another culture before starting the communication process. When you work with video games from another country, you are engaging closely with the products of its culture. It would be a good idea to be familiar with that culture, and an even better idea to love it. Just like anything else you do in life.

Everyone knows about the particularities of business correspondence in English, but what about communicating with Korean developers? What nuances do you have to keep in mind in emails and phone calls?

If you are on equal terms with someone and have been working with them for a while, then you can relax a bit and allow yourself a joke or a smiley. In any case, I usually prefer to start a conversation with a neutral tone and then match whatever tone my colleague chooses. After two or three emails or phone calls, the tone is usually easy to determine.

Many Japanese and Chinese professionals have a limited command of English, even in companies that target Western markets. What about Korean studios? Do you have to learn Korean to communicate effectively?

Based on my experience, I would say often only the top managers of Korean companies speak English well. It seems that professionals don’t need to know a language well: it suffices for them to know how to explain themselves and be familiar with professional terminology, which often also consists of English words. There is a catch, however: even if a Korean professional can explain themselves in simple English, they are unlikely to do so on account of shyness.

It would be great to know Korean, of course, but studying it to the point where you’d be able to seriously communicate in it is a very long and laborious process. Almost all the editors in our translation department study Korean, but right now it just helps us better understand the texts, catch translation bugs, and simply avoid a fear of unfamiliar “symbols.” The translators help us with writing emails.

We conduct most of the correspondence in Korean. We include a Korean translation with the English email, and we translate the Korean emails that we receive into Russian. Of course, translations cost a company resources, but they allow you to show your partners that you value them and care about their comfort.

What does a Korean project need to achieve popularity in Europe?

That, of course, isn’t a localization issue. I wouldn’t call myself an expert on this matter, but I’ll mention a few considerations that I’ve gleaned from talking to colleagues.

Western audiences prefer games that are geared toward their own culture. I don’t think making a game like that is an easy task for Korean developers. Just imagine if we had to create a game for an Eastern market, geared toward an Eastern culture. Then again, Gravity pulled this off: Ragnarok Online feels right at home in the West.

Generally speaking, Western users also like games with an Eastern flair, but it’s important that it’s not too obvious.

One other particularity of Korean game production that Europe isn’t very keen on is free-to-play monetization and its various offshoots. The European market still prefers the traditional models: buy-to-play or pay-to-play.

Sometimes localizers who work with Japanese games must culturally adapt the project and censor it slightly before releasing it in the West.  Are there any aspects of Korean projects that must be changed before being published in the West or Russia?

To be honest, I don’t remember us coming up against any cases of censorship, but I guess there was a lot of fuss about censorship around Blade & Soul. In the game’s Chinese version, all open areas of revealing clothing were tastefully covered up, but we didn’t have anything like that. The exception being, in our version, unlike the Korean one, the famous Angel Outfit cannot be put on a male character, which frustrates a lot of players.

We’ve never had to censor anything in the written texts, but, obviously, we also can’t always translate a text literally or even very closely to the original. We have a completely different logic in our language and way of thinking, so we often have to restore associative and logical connections that are obvious to native Korean speakers but not at all natural to us.

We also try to adapt cultural aspects in certain places. But it’s important to remember that, if you adapt a game that has an Eastern flair, you still need to retain that flair. Here’s an example: we once ran into an item whose name contained a proper noun. After quite a bit of research, we found out the name belonged to a Korean Buddhist monk from the 16th century. Obviously, this monk’s name wouldn’t mean anything to our players, and the monk was difficult to track down, even on the Korean-language internet. If we think of cultural adaptation as the “translation” of the realia of one country into that of another, we would have had to name this item after a Russian monk from five centuries ago. Can you imagine how odd the name of the item would look in Eastern stylistics? In the end, we called the item “Monk’s Staff,” without the proper name.